The United Nations Security Council voted to extend the U.N. political mission in Libya for three months, as the U.S. and Britain accused Russia of blocking a longer and more comprehensive mandate that would include conciliating between the country’s rival authorities claiming power.

Nebenzia said in the absence of a new envoy, the U.N. mission “has been unable to provide substantial support for the political process in Libya for more than six months.” He blamed some unidentified members of the Security Council who he claimed “are not ready to accept a scenario where UNSMIL is guided by an African representative,” saying their opposition is “non-constructive” and “a manifestation of neo-colonialism.”

Britain’s U.N. Ambassador Barbara Woodward, who oversaw negotiations on the resolution, said after the vote that “Russia has once again isolated itself by not joining consensus with the 14 other members of the council” who supported a one-year substantive mandate.

U.S. Deputy Ambassador Jeffrey DeLaurentis said a short mandate “severely complicates” the U.N.’s ability to recruit a new head for the mission and “creates uncertainty for the Libyan people and their leaders over the Security Council’s commitment to Libya.”

DeLaurentis also criticized Russia for eliminating “critical language on reconciliation and security sector reform” which the council’s three African members were pushing to include in the resolution adopted Friday.

The oil-rich North African nation plunged into turmoil after a NATO-backed uprising in 2011 toppled dictator Moammar Gadhafi, who was later killed. It then became divided between rival governments – one in the east, backed by military commander Khalifa Hifter, and a U.N.-supported administration in the capital Tripoli. Each side is supported by different militias and foreign powers.

In April 2019, Hifter and his forces, backed by Egypt and the United Arab Emirates, launched an offensive to try and capture Tripoli. His campaign collapsed after Turkey stepped up its military support of the U.N.-supported government with hundreds of troops and thousands of Syrian mercenaries. An October 2020 cease-fire agreement led to an agreement on a transitional government in early February 2021, and elections scheduled for last Dec. 24 which weren’t held.

The country’s east-based House of Representatives named a new prime minister, former interior minister Fathi Bashagha, to lead a new interim government in February. The lawmakers claimed the mandate of interim Prime Minister Abdul Hamid Dbeibah, who is based in the capital, Tripoli, expired when the election failed to take place. But Dbeibah insists he will remain, prime minister, until elections are held.

Weeklong talks between the rival sides in the Egyptian capital ended on April 19 without an agreement on constitutional arrangements for elections.

After Kubis resigned, Guterres appointed American diplomat Stephanie Williams, a fluent Arabic speaker who served as deputy U.N. special representative in Libya from 2018 to 2020 as his special adviser and sent her to Tripoli. She oversaw the agreements on the cease-fire and transitional government and told reporters after the recent meeting of the rivals in Cairo that they agreed to reconvene in May.

U.N. deputy spokesperson Farhan Haq replied that he expects Williams, whose contract is set to expire, to continue in her role “until we have any further notice to give you.”

Gabon’s U.N. Ambassador Michel Biang read a statement on behalf of his country, Ghana and Kenya, saying the widening divisions in Libya are unfolding “at a crucial juncture” that demands unified Security Council action to make progress toward a sustainable peace “that the Libyan people are craving for.”

The three African council members called on Libya’s rival parties to settle their differences politically, “bearing in mind that the military option will not provide a sustainable solution to the root causes of this crisis.”

They denounced foreign interference in Libya, demanded the synchronized withdrawal of all foreign fighters and mercenaries, and called on the U.N., the African Union and international partners to support national dialogue and reconciliation in the country.

Biang stressed that since the situation in Libya mainly affects the country’s African neighbors, Africans should be involved in the search for a solution and the next U.N. special envoy should be an African.

Norway’s deputy U.N. ambassador Trine Heimerback said the council’s failure to agree on a substantive mandate “not only sends an unfortunate signal to the Libyan people but also to the whole region,” stressing UNSMIL’s “pivotal role in supporting Libya’s political process” and contribution to the country’s stability.

Turkiye's president to 'most probably' have meeting with Putin this week 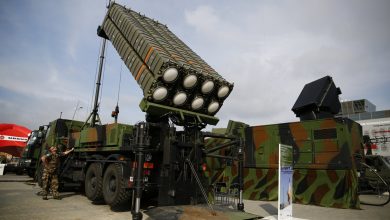